Noise is always a bit of a problem in Spain, especially in flats which, although built with reinforced concrete, seem to ring like a bell with sounds travelling vast distances through the structure!

But I have found a new sound to add to my collection of dogs and babies.

By about 6am on most mornings, I'm starting to wake up which is rather on the early side. At exactly 5:50, for the past few weeks, I've heard the sound of a car followed by a "beep" on the horn - rather annoying although I'm on the 4th floor. I assumed it was someone picking up a friend and the beep was to tell them that they had arrived. Since it is always at the same time and sufficiently accurate for me to set my clock to it (I would do so if it wasn't for the fact that my clock is tuned to the atomic time which is transmitted from Rugby in the UK), I thought that it would be unnecessary to announce the arrival.

One morning, I leaped out of bed and, on hearing the beep, went out onto the balcony - it was very cold - but there was no car. Very mysterious.

Then, two days ago, having given up going back to sleep, I lay in wait for the mystery car. At exactly 5:50, I heard a car being started and then it came into view. Beep. It drove off down the road. At least I got a view of the car; it was a large dark-coloured saloon.

I assume that the driver is saying goodbye to their partner but who knows?

My only solution is to post a note on what I think is the offending car in the evening saying "Please don't beep your stupid horn when you drive past my flat", and "by the way, why do you do it? I want to finish writing a post on my Blog and my readers won't be satisfied until they know the answer." Of course, there's no guarantee that I get the right car. The only alternative is to stand in the middle of the road at 5:50 in the morning.


By coincidence, at 5:30, sometimes I'm woken by noises from a flat above me. It's difficult to tell which one it is as sound travels around the building in rather a peculiar way but I reckon it's my neighbours above who are connected with the dreaded beep. A couple of nights ago it was loud - I'm not absolutely sure it's always the same car! 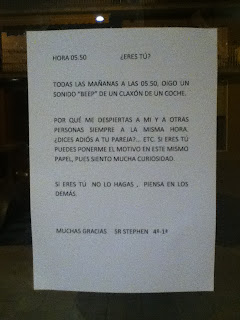 Manuel, who is the president of the community very kindly re-wrote the notice that I sent him and he posted it on the door today. So, let's see what happens now. If you don't understand Spanish, basically it says that, if it's you making this beep, then please don't. And, by the way, why do you do it? - I'm interested. Is it saying goodbye to your partner? This will test if the Spanish (or Rumanians) have a sense of humour because it's all done with good humour - I'm not angry about it. It really isn't that important, just strange!

28 Feb
No beep this morning. I think the problem is solved!