Many years ago, when I was still in the UK, a couple of young girls came up to me while I was sitting outside the golf club with a beer. Maybe I was drawing something but they asked about art and filled one side of a sheet of paper with their doodling in bright colours.

I turned the paper over (this was fairly heavy grade watercolour paper) and started to draw the two girls - I guess they were around 9 years of age. One was outgoing, the other was pensive with a quizzical expression. Within a few minutes, I had captured them on paper. Maybe it was the beer and the relaxed surroundings but I've never been able to draw a person (let alone two) so quickly and well. Sometimes I can spend hours changing a face on paper, never getting close to the actual person. Eyes too low, too far apart, mouth too close to the nose, etc etc. I know the rules of proportions of a face (and they're different for children) but, with the two girls, I didn't follow any rules, it just happened. Normally I would ask permission before publishing photos or a portrait on the internet but it was a long time ago and I don't suppose they look like that now! 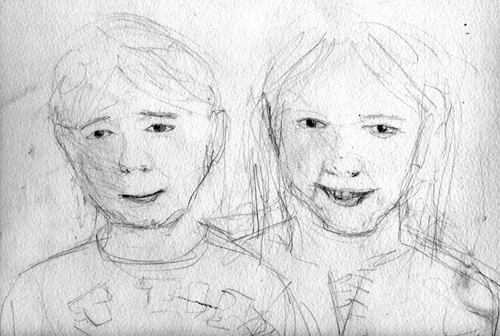 The trouble is, that because I imagined something happened which I don't understand, I feel that I can't recapture that skill, if one could call it that. And people have that skill, it's a gift. Newspaper cartoonists can represent a person very accurately although the face may be distorted in order to make a joke.

Five years ago - in Catalonia now - I used to sit outside the Civic Centre with a beer after swimming. There are quite a few children from The Gambia here in Celrà. Someone told me once that there is a concentration of Gambians around Girona, somehow the city became popular in their home country. Oddly enough, they seem to be almost all girls here. I ended up drawing one or two of the girls and the results were quite reasonable. The African features and the dark skin didn't pose any special problems, in fact I found the features easier to draw than the comparatively bland European faces.

Then, about 3 years ago, I had a bit of a black patch in my life and thought that I'd never be able to paint or draw again - especially portraits which I had decided required a special kind of delicate skill. Well, that's been disproved but I still felt that I'd never be able to go back to portraits - the most rewarding type of art in my view. This wasn't helped by my recent attempts to draw a friend's daughter from a photo. Never draw from a photo - fatal! I could not get anything right, eyes too low, etc etc as before.

Then, as I was sitting in a tree-lined area next to my flat a couple of days ago, who should come up to talk to me but a group of Gambian girls who wanted their portraits drawn (maybe they'd spoken to their friends who I'd drawn previously). I arranged to come back the next day at 5pm with all my gear: an easel, chair and materials. They wanted three portraits, the youngest was little more than a baby and wouldn't sit still, the second - about 5 years old - had a dazzling smile which nearly split her face in two. The last was the oldest girl there, I would guess around 15 or 16. You're probably asking why I always end up drawing young girls and not adults or boys but that's just the way it happens!

Now I'm coming round to why I'm writing this!

Because I was drawing from life and not a photo, I could interact with the subject and extract a variety of expressions and responses and this to me is vital. I found the old feeling coming back and, although the results weren't brilliant, I was greatly encouraged. I was working rapidly and the finished results were quite rough. The girls seemed happy. We're having another session tomorrow and I'm  going to use a different paper as previously I was using watercolour paper which is too textured. It tends to capture the graphite too much and then it's difficult to erase. I have loads of paper especially for drawing.

So, in my view, it's about understanding the rules of proportions (the gap between the eyes tends to be one eye-width, for example) but, also, it's about the subject's personality. That's what I'm out to capture - to do something that even a camera doesn't always do.

Today, I went back and drew some more portraits. I made the mistake of drawing one girl at 3/4 angle because she looked attractive at that angle but the mouth was very difficult. No problem drawing lips from the front where they are symmetrical but part side-on, it's a different story. Maybe it's difficult because they are African lips which, of course, are larger and more prominent than the European version. The lips are actually paler than the surrounding skin and, in one case, there is a pale line above the upper lip.

I just ordered some water-soluble graphite for the dark skin. This may give a smoother result as I try to darken the drawing with a graphite stick which leaves lines. I suppose I could sprinkle graphite dust onto the drawing but I didn't think about it at the time.